Fixing the mistakes!  A daunting process to say the least.  But as I went back to the very beginning of Behind the Mask, and read it word or word, the rawness of it hit me like a tsunami.  It was definitely choppy reading and didn’t flow.  And as I read through it picking out the typos and grammatical errors, there was a part of me that wanted to just start over and rewrite the entire book. But then I thought, this was my baby, so it’s imperfect and has flaws. If I went back and changed it up too much, it would lose its authenticity.  At least, that’s my thinking.  I also still stick by my mantra of you can’t please everyone, and not everybody is going to like my stories. Because even though the chapters might be choppy, I still believe the story itself is good and the characters are root-worthy.  Again, some might not think so, but it is what it is.

Writing-wise, the sequel, UNMASKED, is better by leaps and bounds.  Not choppy and flows with ease.  But when it came to writing that book, I had more experience and a first, novel under my belt. I felt more confident too when people would ask about my writing.  With the first book, I never fully felt sure of myself when someone would ask about the book.  In fact, the running joke used to be…”Oh you’re writing a novel, when will it be available?” and my stock answer, “Don’t hold your breath!” Looking back on that, makes me laugh because I actually followed through and not only completed one novel but two!  A fact I sometimes still find hard to believe myself.

But I digress, jumping back to Behind the Mask, I corrected most of the glaring typos, although a few might have still slipped through.  And fixed many of the grammatical and spelling errors.  However, the thing about fiction writing these days, or at least from what I’ve read, an author can write in his/her own way, and the old rules don’t seem to apply.  And for someone like me, that’s a good thing, cause I think my writing style is very unconventional.  That said, it doesn’t excuse the errors.

I’ve updated both the paperback and Kindle versions.  Though, it doesn’t appear that Amazon alerts previous buyers that an updated Kindle version is avaiable. 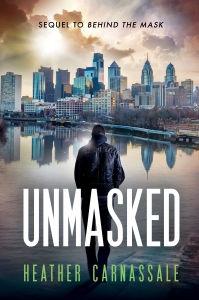